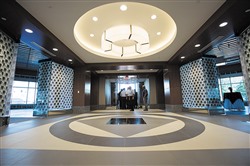 Boyle Investment Co.’s new Class A office building at the Schilling Farms development in Collierville brings 25,000 square feet of speculative space to an office submarket that has some momentum.

Boyle Investment Co. is wrapping up construction on a critical corner of Schilling Farms that will bring more retail and encourage more office users to consider the development. The three adjacent projects fill in the southern quadrant of Schilling Boulevard and Winchester Road, a small part of the sprawling 443-acre, city-within-a-city in Collierville.

Next door to the recent office building is a 9,000-square-foot retail strip currently under construction and an eight-building apartment project dubbed Carrington West, of which a few buildings have been completed. On the east side of Schilling Boulevard is the original Carrington, a 111-unit apartment community that has reached full occupancy.

The three side-by-side projects work together to fill in Schilling Farms to the south and encourage more office users to consider vacant land facing Poplar Avenue at the north end of Schilling Farms, said Les Binkley, vice president with Boyle.

“We see this zone at Schilling Boulevard and Winchester as anchoring this southern section of Schilling Farms,” Binkley said. “We’re trying to get as many housetops to justify as much retail services as we can provide, to hopefully enhance the desirability for a corporate office.”

Boyle’s completed office building also brings to the market 25,000 square feet of speculative Class A office space, which Duncan hopes will be a shot in the arm to the Collierville office market.

“We are trying to develop a pent-up demand for that. We don’t really have any Class A space available,” Duncan said. “Now that we’ve got some, it helps us to promote others in our direction. We’re pretty bullish on the fact that Boyle and Schilling Farms, and what’s going on with Orgill, will spark some renewed interest in our community for expansion and relocation.”

Boyle has traditionally focused on building capacity through office users and residents, and the traditional retail strip under construction marks new territory for Schilling Farms. Retail has been slow to grow at the development, with the first speculative retail space hitting the market in 2014.

A 1,200-square-foot space on the ground floor of the original Carrington building is still empty, but Binkley said a food user is soon to sign a lease.

The ground floor of the new mixed-use office building has space for a 5,000-square-foot retail tenant, bringing 15,000 square feet of available retail space to the corner of Winchester and Schilling boulevards. Binkley added that the ground-floor retail space at the original Carrington and the new office building move Schilling Farms into a denser direction.

“There’s lots of horizontal mixed-use in Schilling, and we’re trying to move forward into some vertically integrated mixed-use,” he said.

For retail tenants, he’s looking to recruit food and beverage options as well as convenience retail like a dry cleaners.

Binkley said Boyle’s aspiration for the intersection is for residents, and for parents and children when they get out of Schilling Farms Middle School, to be able to walk and get a smoothie or ice cream, and where office tenants can grab lunch